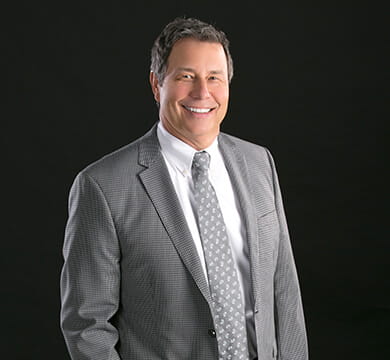 Jerry founded his own practice in 1993 after 10 successful years in the financial services industry with Securities Corporation of Iowa (SCI). His investment knowledge and affable manner proved to be a valuable combination that helped Jerry attain top-producer status. In March 2011, he chose to align with Raymond James Financial Services, an independent broker/dealer.

He is a CERTIFIED FINANCIAL PLANNER™ professional, having successfully completed rigorous coursework in financial planning, insurance, investments, tax planning, retirement planning and estate planning. Jerry holds Series 7, 63 and 24 registrations. Jerry earned his bachelor's degree in business management, with an emphasis in finance, from the University of Northern Iowa.

Jerry’s accolades include being named one of Forbes Best-In-State Wealth Advisors1 and he ranked #4 in Iowa for 2022! In 2021, Jerry ranked #5 in Iowa for Barron’s Top 1,200 Advisors2. He also earned a spot as one of Financial Times 400 Top Financial Advisers3 in the U.S. for 2020 and has qualified for the Raymond James’ Chairman’s Council since 20134.

A lifelong resident of Cedar Rapids, Jerry is married to Shelley and they lead a very full and active lifestyle. He’s a proud father of four children and six grandchildren. His children live in four states, which makes travel a frequent and interesting part of their schedules. When not spending time with family, Jerry’s hobbies include swimming, golfing, biking (Ragbrai), CrossFit, Iowa Football and CR Kernels baseball.

As an avid animal lover, Jerry works with a group that daily feeds homeless cats, many of which were victims of the Cedar Rapids, Iowa flood of 2008. Working with several animal shelters, Jerry continues to rescue strays, have them spayed/neutered and helps find their forever home.

For many years Jerry has given back to the community by spreading the benefits of a healthy lifestyle. He has coached young people in more than 900 games in basketball, softball, baseball and soccer. Seven of his players have gone on to play college basketball, including Jarrod Uthoff, who played for the University of Iowa and in the NBA. For 10 years Jerry has served as a children's Sunday School volunteer at Stonebridge Church.

1 The Forbes ranking of Best-In-State Wealth Advisors, developed by SHOOK Research, is based on an algorithm of qualitative criteria, mostly gained through telephone and in-person due diligence interviews, and quantitative data. Those advisors that are considered have a minimum of seven years of experience, and the algorithm weights factors like revenue trends, assets under management, compliance records, industry experience and those that encompass best practices in their practices and approach to working with clients. Portfolio performance is not a criteria due to varying client objectives and lack of audited data. Out of approximately 32,000 nominations, more than 4,000 advisors received the award. This ranking is not indicative of advisor's future performance, is not an endorsement, and may not be representative of individual clients' experience. Neither Raymond James nor any of its Financial Advisors or RIA firms pay a fee in exchange for this award/rating. Raymond James is not affiliated with Forbes or Shook Research, LLC. Please visit https://www.forbes.com/best-in-state-wealth-advisors for more info.

2 Barron's Top 1,200 Financial Advisors, 2020. Barron's is a registered trademark of Dow Jones & Company, L.P. All rights reserved. The rankings are based on data provided by over 4,000 individual advisors and their firms and include qualitative and quantitative criteria. Factors included in the rankings: assets under management, revenue produced for the firm, regulatory record, quality of practice and philanthropic work. Investment performance is not an explicit component because not all advisors have audited results and because performance figures often are influenced more by clients' risk tolerance than by an advisor's investment picking abilities. The ranking may not be representative of any one client's experience, is not an endorsement, and is not indicative of advisor's future performance. Neither Raymond James nor any of its Financial Advisors pay a fee in exchange for this award/rating. Barron's is not affiliated with Raymond James.

3 The Financial Times 400 Top Financial Advisors is an independent listing produced annually by Ignites Research, a division of Money-Media, Inc., on behalf of the Financial Times (April 2020). To qualify for the list, advisers had to have 10 years of experience and at least $300 million in assets under management (AUM) and no more than 60% of the AUM with institutional clients. The FT reaches out to some of the largest brokerages in the U.S. and asks them to provide a list of advisors who meet the minimum criteria outlined above. These advisors are then invited to apply for the ranking. Only advisors who submit an online application can be considered for the ranking. In 2020, roughly 1,040 applications were received and 400 were selected to the final list (38.5%). The 400 qualified advisers were then scored on six attributes: AUM, AUM growth rate, compliance record, years of experience, industry certifications, and online accessibility. AUM is the top factor, accounting for roughly 60-70 percent of the applicant's score. Additionally, to provide a diversity of advisors, the FT placed a cap on the number of advisors from any one state that's roughly correlated to the distribution of millionaires across the U.S. The ranking may not be representative of any one client's experience, is not an endorsement, and is not indicative of advisor's future performance. Neither Raymond James nor any of its Financial Advisors pay a fee in exchange for this award/rating. The FT, Ignite Research, and Money-Media, Inc. are not affiliated with Raymond James.

4 Membership is based on prior fiscal year production. Re-qualification is required annually. The ranking may not be representative of any one client's experience, is not an endorsement, and is not indicative of advisors future performance. No fee is paid in exchange for this award/rating.

in the U.S., which it awards to individuals who successfully complete CFP Board’s initial and ongoing certification requirements.

HOW CAN WE HELP YOU? SCHEDULE A COMPLIMENTARY CONSULTATION.

Raymond James financial advisors may only conduct business with residents of the states and/or jurisdictions for which they are properly registered. Therefore, a response to a request for information may be delayed. Please note that not all of the investments and services mentioned are available in every state. Investors outside of the United States are subject to securities and tax regulations within their applicable jurisdictions that are not addressed on this site. Contact your local Raymond James office for information and availability.